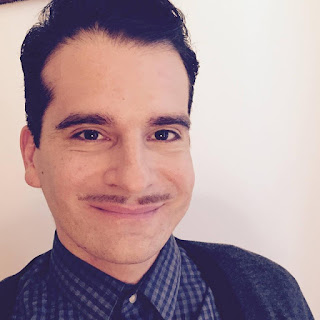 Hello and welcome to The Rob Burgess Show. I am, of course, your host, Rob Burgess.
On this, our 88th episode, our returning guest is Carlos Dengler. You first heard Carlos Dengler on Episode 87 of the podcast.
Carlos Dengler is a working actor and musician in New York City. He is currently working on his memoir detailing his time spent as bass player and keyboardist for the alt-rock group Interpol, from 1998 to 2010. After leaving the band, Carlos enrolled at Stella Adler Studio of Acting and then was fortunate to have been accepted to NYU Grad Acting, where he received his MFA in Acting in 2015. Since graduation, Carlos has been working in the theatre, creating and launching a successful one-man show called “Homo Sapiens Interruptus” for the NY International Fringe Festival of 2016, and cast in a recent production of “A Babylon Line” by the great playwright Richard Greenberg at Lincoln Center Theater featuring actor Josh Radnor in the lead. In early 2016, Carlos appeared briefly on “The Late Night with Seth Meyers” show, filling in on bass guitar with The 8G Band, the Seth Meyers house band. Carlos has also spent time crafting his approach to memoir writing. He was recently published by the literary magazine N+1 with an essay, “Stories of Excess.” He is currently finishing up the first stages of a publishing deal for his upcoming book, detailing his time in the band, his personal life and childhood, and his observations upon leaving behind life in the music industry. Carlos is an avid tweeter, with an unabashed progressive liberal swing to his thought, and is a lay but voracious consumer of current political thought. You can follow him there @denglercarlos.
If you enjoy this podcast, there are several ways to support it.
I have a Patreon account, which can be found at www.patreon.com/robburgessshowpatreon. I hope you'll consider supporting in any amount.
Also please make sure to comment, follow, like, subscribe, share, rate and review everywhere the podcast is available, including iTunes, YouTube, SoundCloud, Stitcher, Google Play Music, Facebook, Twitter, Internet Archive, TuneIn and RSS.
The official website for the podcast is www.therobburgessshow.com.
You can find more about me by visiting my website, www.thisburgess.com.
Until next time.