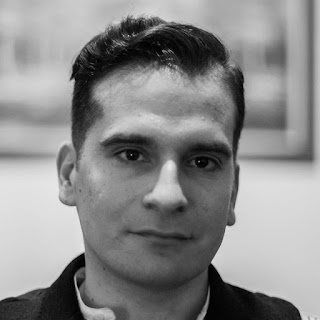 Photo by: Craig Johnston
Hello and welcome to The Rob Burgess Show. I am, of course, your host, Rob Burgess.
On this, our 87th episode, our guest is Carlos Dengler.
Here is his biography:
“In 1998 I co-founded the band Interpol with Daniel Kessler and Paul Banks. Sam Fogarino joined in 2000, and over the next decade we went on to release four studio albums and tour the world three times, playing numerous festivals, live radio shows and late night TV. Interpol’s first two albums have gone Gold in the United States and the band is regarded as a seminal indie rock band of the early millennium.
“In 2007, I began experiencing personal and creative differences with my bandmates and the music industry. In 2009, the band entered group therapy to try to find a way to resolve those differences. Despite our best collective efforts over the course of a year, we could not do so, and I wasn’t able to stay. I left the band just before New Year's Day 2010.
“Actor training became my new focus. For the next five years I spent virtually all of my time within the privacy of conservatory classrooms, around other young students who were undergoing a similar process of discovery. In 2012, I was fortunate to be accepted to New York University Graduate Acting and received a Master of Fine Arts degree in the spring of 2015.
“I made my professional acting debut in the summer of 2015 at the Dorset Theatre Festival, in the regional premiere of Katie Forgette's very funny 'Sherlock Holmes and the Case of the Jersey Lily,' playing two roles – Professor Moriarty's lackey, John Smythe and chief attendant to Queen Victoria, Abdul Karim.
“I’ve also begun working on an essayistic memoir. I’m quite excited by some of the directions the work is taking so far. I’ve started soliciting publishers. It’s very early in the process and I will continue to update as things progress.
“In late March 2016 I had the honor of performing with the 8G Band, the house band on 'Late Night with Seth Meyers.' It truly was a special experience to play bass guitar with such incredible musicians on such a fun and exciting show.
“I was very excited to have presented my solo show, 'Homo Sapiens Interruptus,' at The New York International Fringe Festival in August 2016. The show was created while I was at NYU and had been developing and workshopping it consistently since it began.
"At the end of 2016, I was cast in Richard Greenberg's new play, 'The Babylon Line,' understudying for Josh Radnor at Lincoln Center Theater."
You can catch Carlos this week as he stars in “A Proust Sonata,” a “multimedia concert-theater work conceived and directed by Sarah Rothenberg, artistic and general director of Da Camera. The production is inspired by Marcel Proust's early 20th century masterpiece 'In Search of Lost Time' and interweaves text, music, and image into an innovative multi-media performance.” Performances start at 8 p.m. Thursday, Friday and Saturday at the Lois Chiles Studio Theater at the Moody Center for the Arts at Rice University, 6100 Main St., Houston, Texas. For tickets and more information call 713-348-ARTS or visit their website at https://moody.rice.edu/events/proust-sonata.
If you enjoy this podcast, there are several ways to support it.
I have a Patreon account, which can be found at www.patreon.com/robburgessshowpatreon. I hope you'll consider supporting in any amount.
Also please make sure to comment, follow, like, subscribe, share, rate and review everywhere the podcast is available, including iTunes, YouTube, SoundCloud, Stitcher, Google Play Music, Facebook, Twitter, Internet Archive, TuneIn and RSS.
The official website for the podcast is www.therobburgessshow.com.
You can find more about me by visiting my website, www.thisburgess.com.
Until next time.


Here is the n+1 magazine essay discussed in this week's episode: https://nplusonemag.com/online-only/online-only/stories-of-excess/
Posted by The Rob Burgess Show at 7:49 AM