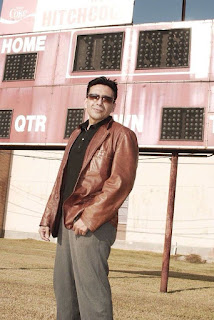 Hello and welcome to The Rob Burgess Show. I am, of course, your host, Rob Burgess.
On this, our 94th episode, our guest is Tony Diaz.
Writer, activist, and professor Tony Diaz, El Librotraficante, was the first Chicano to earn a Master of Fine Arts Degree from the University of Houston Creative Writing Program. He earned his bachelor's degree in Communications from De Paul University in Chicago. Diaz is currently a professor of Mexican American Literature and Rhetorical Analysis in Houston, Texas.
Diaz is also a political analyst on "What's Your Point?" which airs on Fox 26 Houston. 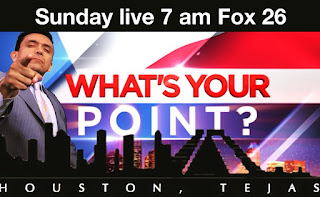 He also hosts the weekly bilingual radio program Nuestra Palabra: Latino Writers Having Their Say which covers Latino Literature, Art, and Politics on KPFT 90.1 FM Houston. His essays have appeared in the Houston Chronicle, The Texas Observer, CNN.com, the Los Angeles Times, and The Huffington Post Latino Voices, among other publications. He wrote the novel The Aztec Love God and is included in "Hecho En Tejas: The Anthology of Texas Mexican Writers". He recently launched the column “The Cultural Accelerator” to address issues that other publications don’t address in a unique style and point of view.
He is the lead writer and editor for the textbook "The Mexican American Studies Toolkit". He also is an educational consultant for school districts implementing innovative curriculum. Diaz currently resides in Houston where he continues to fight for Intellectual Freedom and Freedom of Speech.
Diaz made national and international news when he led the Librotraficantes in defying Arizona's ban of Mexican American Studies by leading veteran members of Nuestra Palabra to organize the 2012 Librotraficante Caravan to smuggle books banned in Tucson back into Arizona.

In December, A. Wallace Tashima, a U.S. federal judge in the U.S. District Court for the District of Arizona, ruled against the state, declaring the ban unconstitutional.
If you enjoy this podcast, there are several ways to support it.
Join The Rob Burgess Show mailing list! Go to tinyletter.com/therobburgessshow and type in your email address. Then, respond to the automatic message.
I have a Patreon account, which can be found at www.patreon.com/robburgessshowpatreon. I hope you'll consider supporting in any amount.
Also please make sure to comment, follow, like, subscribe, share, rate and review everywhere the podcast is available, including iTunes, YouTube, SoundCloud, Stitcher, Google Play Music, Facebook, Twitter, Internet Archive, TuneIn and RSS.
The official website for the podcast is www.therobburgessshow.com.
You can find more about me by visiting my website, www.thisburgess.com.
If you have something to say, record a voice memo on your smartphone and send it to therobburgessshow@gmail.com. Include “voice memo” in the subject line of the email.
Until next time.