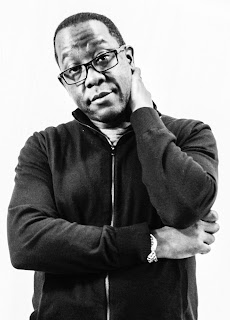 Hello and welcome to The Rob Burgess Show. I am, of course, your host, Rob Burgess. On this, our 96th episode, our guest is D.K. Hamilton.
A “student of human behavior,” D.K. Hamilton is a nationally-touring comic, entertaining audiences with his unique, smart, and sardonic takes on pop culture, race, and relationships. Named “Funniest Person in Grand Rapids” by Grand Rapids Magazine for two consecutive years and featured in its March 2013 issue, D. K. finds humor in examining the things that we secretly believe but are too polite to say out loud. Using his ability to entertain a great variety of audiences without resorting to lowest common denominator humor, D.K. Hamilton was entertained at the Laugh Detroit Comedy Festival, performed in the FOX 101.3 Brew Ha Ha, competed in Cleveland Comedy Festival, performed in the Limestone Comedy Festival, and performed in Gilda’s Laughfest including being selected to perform twice in Laughfest's Best" show. D.K. Hamilton is featured in the award-winning webseries "Lucky Jay".
And now, on to the show.
The Rob Burgess now has a newsletter! I promise not to bother you more than every seven days, or so. And, I promise to make it worth your while. Go to tinyletter.com/therobburgessshow and type in your email address. Then, respond to the automatic message. Hit pause now. I'm serious. I'll wait.
Oh, you're back? Thank you!

If you enjoy this podcast, there are several ways to support it.
Join The Rob Burgess Show mailing list! Go to tinyletter.com/therobburgessshow and type in your email address. Then, respond to the automatic message.
I have a Patreon account, which can be found at www.patreon.com/robburgessshowpatreon. I hope you'll consider supporting in any amount.
Also please make sure to comment, follow, like, subscribe, share, rate and review everywhere the podcast is available, including iTunes, YouTube, SoundCloud, Stitcher, Google Play Music, Facebook, Twitter, Internet Archive, TuneIn and RSS.
The official website for the podcast is www.therobburgessshow.com.
You can find more about me by visiting my website, www.thisburgess.com.
If you have something to say, record a voice memo on your smartphone and send it to therobburgessshow@gmail.com. Include “voice memo” in the subject line of the email.
Until next time.
Posted by The Rob Burgess Show at 1:56 PM