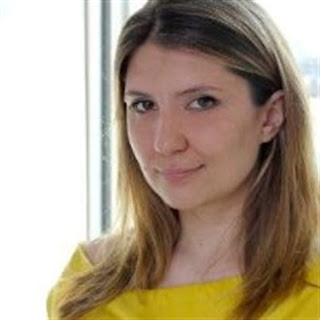 Hello, and welcome to The Rob Burgess Show. I am, of course, your host Rob Burgess.
On this, our 139th episode, our guest is Andrea Chalupa.
Here is her biography:
“I was born and raised in Davis, California, and currently live in Brooklyn, New York. After graduating from the University of California, at Davis with High Honors in History, with a focus on Soviet History, I studied Ukrainian at the Harvard Ukrainian Research Institute and the International School of Ukrainian Studies in L’viv, Ukraine. As a journalist, I cut my teeth in the newsrooms of Conde Nast Portfolio and AOL Money & Finance, and have written articles and columns for The Daily Beast, Forbes, TIME, and The Atlantic. Since 2004, while finishing my History thesis on the role of religion in Ukraine’s independence movement at the fall of the Soviet Union, I began dreaming up a screenplay that would take me fifteen years to research, write, and produce. That screenplay became Mr. Jones, directed by three-time Academy Award-nominee Agnieszka Holland and starring James Norton, Vanessa Kirby, Peter Sarsgaard, and Joseph Mawle as George Orwell. Much of the research for the film was compiled into my book, Orwell and The Refugees: The Untold Story of Animal Farm, which has been taught in classrooms in Canada and Ukraine through the genocide education program Orwell Art.
“When I was growing up in Northern California, my grandfather Olexji was the world to me. Born in Donbas, a region in eastern Ukraine currently being invaded by Russia, my grandfather witnessed the Russian Revolution fought on his family farm as a small boy; survived the Holodomor, Stalin’s genocide famine that killed an estimated 4 million to 7 million people; and as a young father was arrested and tortured by the Soviet secret police during Stalin’s purges. Shortly before he passed away at the age of 83, my grandfather wrote down his life story, showing the events Orwell allegorized in Animal Farm through the eyes of a survivor.
“It was for my grandfather and the countless others who suffered under the Soviet regime that I wrote and produced Mr. Jones. The idea first came to me in my final year of university and followed me to Ukraine after college and to a road trip through Wales shortly before my wedding, and many research trips for several years after. I wanted to tell a story that would honor the millions of victims of Stalin, who has been resurrected under Putinism as a great hero, and expose how Kremlin propaganda works - sometimes with the help of corrupt Western journalists and political leaders. The history of Stalin’s genocide is told through this short documentary I was asked to write, direct, and produce for genocide education by the Holodomor Research and Education Consoritum at the University of Alberta. It features interviews with the Pulitzer Prize-winning historian Anne Applebaum, author of Red Famine: Stalin’s War on Ukraine and Gulag: A History; Yale University’s Timothy Snyder, author of Bloodlands: Europe Between Hiter and Stalin and On Tyranny: Twenty Lessons from the Twentieth Century; Harvard University’s Serhii Plokhy, author of The Gates of Europe: A History and The Last Empire: The Final Days of the Soviet Union, Stanford University’s Norman Naimark, author of Stalin’s Genocides, and other leading historians on this period. You can watch the documentary, Stalin’s Secret Genocide.
“As surreal as this journey has been against the backdrop of growing authoritarianism around the world, I met along the way brave human rights activists and journalists who continuously restored my faith. In January 2014, I helped launch #DigitalMaidan, a hashtag of the revolution in Ukraine; #MarchForTruth, a nationwide protest on June 3, 2017 demanding transparency and accountability in the Russia investigation, and helped lead a crowdfunding campaign to turn an oligarch’s abandoned private zoo in Ukraine into an animal refuge.
“Over the years, I have spoken about Ukraine and Russia in the World Forum for Democracy at the Council of Europe, the Personal Democracy Forum at New York University, the National Press Club in Washington, DC, the National Arts Club in New York City, and went on a two-week university lecture tour of Canada, including McGill University, Carleton University, and the University of Toronto.
“And yes, I have a sister, Alexandra Chalupa, called one of the most influential people of the 2016 election by the investigative journalist Michael Isikoff who, along with David Corn, the first journalist to publish an interview with Christopher Steele, features my sister in their bestselling book Russian Roulette: The Inside Story of Putin’s War on America and the Election of Donald Trump. The first three episodes of Gaslit Nation, recapping the 2016 election like a crime scene, explain how my sister was harassed and risked her life and career to alert the media about Paul Manafort and the Kremlin’s attack on our democracy as it was happening.”
Join The Rob Burgess Show mailing list! Go to tinyletter.com/therobburgessshow and type in your email address. Then, respond to the automatic message.
I have a Patreon account, which can be found at www.patreon.com/robburgessshowpatreon. I hope you'll consider supporting in any amount.
Also please make sure to comment, follow, like, subscribe, share, rate and review everywhere the podcast is available, including iTunes, YouTube, SoundCloud, Stitcher, Google Play Music, Facebook, Twitter, Internet Archive, TuneIn and RSS.
The official website for the podcast is www.therobburgessshow.com.
You can find more about me by visiting my website, www.thisburgess.com.If you have something to say, record a voice memo on your smartphone and send it to therobburgessshow@gmail.com. Include “voice memo” in the subject line of the email.

Posted by The Rob Burgess Show at 1:34 PM