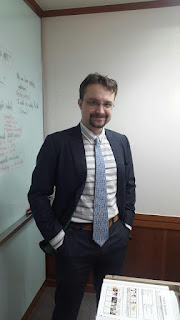 Hello and welcome to The Rob Burgess Show. I am, of course, your host, Rob Burgess.
On this, our 56th episode, our returning guest is Jonathan Fowler.
You first heard Jonathan Fowler on Episode 2, Episode 10, Episode 20, Episode 21, Episode 29, Episode 30, Episode 31, Episode 32, Episode 34, Episode 35, Episode 43, Episode 48 and Episode 51 of the podcast. Jonathan graduated with a BA in history from Indiana University in 2006. He is an unabashed left-wing political junkie. He has lived and worked in South Korea for 10 years, trying to help the citizens of that great nation, hopefully, "talk pretty one day."
A quick programming note: As you'll hear I was in rough shape health-wise when we recorded this episode, so I got a few minor facts wrong. The Senate race in Indiana between Democrat Joe Donnelly and Republican Richard Mourdock was in 2012 not 2010. The video of the passenger being ejected from a plane was a United flight not Delta. Also, after we recorded this episode, it was revealed that the USS Carl Vinson was actually headed away from the Korean Peninsula, not toward it. I'm sure Jonathan and I will discuss this at length during our next episode together.
If you enjoy this podcast, there are several ways to support it.
I have a Patreon account, which can be found at www.patreon.com/robburgessshowpatreon. I hope you'll consider supporting in any amount.
Also please make sure to comment, follow, like, subscribe, share, rate and review everywhere the podcast is available, including iTunes, YouTube, SoundCloud, Stitcher, Google Play Music, Facebook, Twitter, Internet Archive, TuneIn and RSS.
The official website for the podcast is www.therobburgessshow.com.
You can find more about me by visiting my website, www.thisburgess.com.
Until next time.

Posted by The Rob Burgess Show at 7:31 AM