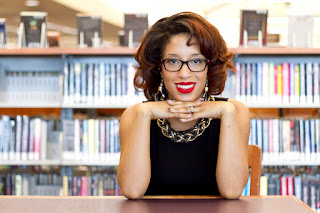 Hello and welcome to The Rob Burgess Show. I am, of course, your host, Rob Burgess.
On this, our 55th episode, our guest is Asia McClain Chapman.
Asia McClain Chapman will be familiar to fans of the first season of the “Serial” podcast. If you haven’t listened to that yet, you should probably listen to it before you hear this episode. It will make a lot more sense. Last year, she released her book, “Confessions of a Serial Alibi,” which tells the story of her journey from ordinary library patron to a key alibi witness for Adnan Syed. In the book, McClain discusses everything from her memories of Woodlawn High School, to her conversations with several key individuals such as Adnan Syed, Rabia Chaudry, Justin Brown, Gary Proctor and former state's prosecutor Kevin Urick.
Asia McClain Chapman was born on June 26, 1981, in Inglewood, California. Her parents, Carl and Michele McClain, were separated in 1986 resulting in her relocation to Baltimore, Maryland. After growing up in the Baltimore County school system, Asia graduated from Woodlawn High School in 1999 and proceeded to college.
In search of a fresh start Asia made the decision to drive across the country in 2005. After several years of living in Portland, Oregon, and working full-time as a personal assistant, Asia met her now-husband Phillip Chapman in 2008. The couple married in 2009 and they are now the proud parents of three rambunctious little boys, Lucas, Alexander and Ethan Chapman.
Located in Spokane, Washington, Asia spends her days as a stay-at-home mother, board secretary of Solutions Automation and small business owner of Diamond Concepts.
In addition to her commitment to her businesses, Asia enjoys web-designing, writing, cooking, gardening and working with her hands in addition to participating in events with her local MOMS Club chapter and church.
If you enjoy this podcast, there are several ways to support it.
I have a Patreon account, which can be found at www.patreon.com/robburgessshowpatreon. I hope you'll consider supporting in any amount.
Also please make sure to comment, follow, like, subscribe, share, rate and review everywhere the podcast is available, including iTunes, YouTube, SoundCloud, Stitcher, Google Play Music, Facebook, Twitter, Internet Archive, TuneIn and RSS.
The official website for the podcast is www.therobburgessshow.com.
You can find more about me by visiting my website, www.thisburgess.com.
Until next time.

Posted by The Rob Burgess Show at 3:50 PM