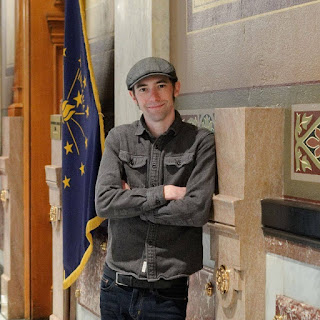 Hello and welcome to The Rob Burgess Show. I am, of course, your host, Rob Burgess.
On this our 182nd episode, our guest is … me!
My first solo episode of this podcast was Episode 41, the second was Episode 62, the third was Episode 84, the fourth was Episode 117 and the fifth was Episode 131 and the sixth was Episode 135. And, on Episode 100, I was joined by my wife and regular guest Ash Burgess, who interviewed me.
I am a 10-time award-winning journalist whose work has appeared in print, radio, online, and television. I am currently Editor of the Wabash Plain Dealer. Most recently, I was News Editor of NUVO; Managing Editor of the Indiana Lawyer; and City Editor, Opinion Page Editor and Editorial Board Member of the Kokomo Tribune. I was also a reporter at WFHB, the Times-Mail, The Reporter-Times, Ukiah Daily Journal and Ukiah Valley Television.
Oh yeah, and I’m also the proprietor of the podcast, The Rob Burgess Show.

A quick programming note: This is my first solo episode since February 2019, and I have much else to discuss on a future solo episode, but I recorded this episode yesterday, Saturday, Nov. 7, just a few hours after the presidential election was called, and this episode will focus on that.