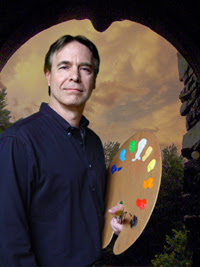 On this our 218th episode, our guest is T. E. Breitenbach.

T. E. Breitenbach, born in 1951 in Queens, New York, is a self-taught American artist best known for his painting "Proverbidioms", a raucous and comical depiction of over 300 common proverbs and clichés. He also collaborated with Jim Morrison of The Doors, shortly before Morrison's 1971 death, on a painting intended for use on his "An American Prayer" album. T. E. was the youngest person to receive a Rome Prize Fellowship in visual arts. Inspired by the castles and museums of Europe, he returned home determined to build a castle-studio to house his art and eventually become a museum. During the planning stages he painted Proverbidioms and later published it. He also writes musicals and in 2016 produced "Hieronymus, A Musical Fantasy", the story of an artist with a 'too-large' imagination, available as play-on-demand on PBS. His websites include TEBreitenbach.com and OurMusical.com.

Join The Rob Burgess Show mailing list! Go to tinyletter.com/therobburgessshow and type in your email address. Then, respond to the automatic message.
Also please make sure to comment, follow, like, subscribe, share, rate and review everywhere the podcast is available, including iTunes, YouTube, SoundCloud, Stitcher, Google Play Music, Twitter, Internet Archive, TuneIn, RSS, and, now, Spotify.
The official website for the podcast is www.therobburgessshow.com.
You can find more about me by visiting my website, www.thisburgess.com.If you have something to say, record a voice memo on your smartphone and send it to therobburgessshow@gmail.com. Include “voice memo” in the subject line of the email. Also, if you want to call or text the show for any reason, the number is: 317-674-3547.