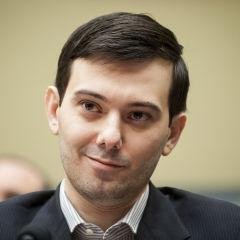 Hello, and welcome to The Rob Burgess Show. I am, of course, your host, Rob Burgess.
On this, our 13th episode, our guest is Martin Shkreli. Yes, that Martin Shkreli.
[A quick programming note: If you already know the Martin Shkreli saga and just want to hear my conversation with him, go ahead and skip to the end now. Everyone else, keep it locked.]
Shkreli, a former hedge fund manager and Turing Pharmaceuticals CEO, became internationally infamous in October 2015 when he purchased Daraprim, a drug used to treat toxoplasmosis. There is a good chance you already host toxoplasmosis, especially if you have a cat, but you may never know it. Only children, pregnant mothers and those with weakened immune systems are at risk for developing symptoms. But for those who do, the symptoms can be severe, even fatal. The medication used to treat patients, pyrimethamine, has been available since 1953.
Shkreli inspired indignation when he upped the price of the drug by over 5,000 percent from $13.50 per pill to $750.
Then, in December 2015, he was arrested by the FBI on securities fraud charges. He is currently out on bail.
On Feb. 4, Shkreli testified before the Committee on Oversight and Government Reform of the U.S. House of Representatives.


The album you heard mentioned in another story entirely. Starting in 2008, rap group the Wu-Tang Clan spent five years recording an album only one person, one who couldn't legally profit from until 2103. In May 2015, Shkreli was the winner of an auction for "Once Upon a Time in Shaolin," paying $2 million. Here's Wu-Tang Clan leader The RZA being interviewed by Jan. 6, by Bloomberg, who broke the story in December 2015.


Later in January, Wu-Tang Clan member Ghostface Killah was asked about Shkreli by TMZ. He responded by calling him a shithead. A few days later, TMZ published a video response from Shkreli, who, stemless wine glass in hand, had three masked men placed behind him.

During his Feb. 3 appearance on Power 105.1's “The Breakfast Club,” Shkreli added fuel to the fire.

A few days later, Ghostface Killah issued a video response that doubled as a promotion for his CBD oil, Wu Goo.

You get the idea.
So, here's how I happened to speak with Shkreli. On May 27, Shkreli tweeted the following: “I haven't been called by the Trump camp. I support him vs. Hillary. He should find a VP candidate who is seasoned in politics, an ugly game.” The same day, Colin Daileda of Mashable published an article titled: “America's most hated man endorses its most hated presidential candidate.” On May 28, Shkreli published his phone number, 646-217-2783, on Twitter and asked people who hate him to call him to prove Daileda were wrong. From there, Shkreli and I tweeted back and forth and I dialed his number on a phone without a redial button I knew of for more than 30 minutes. Finally, I got through. And, now, my conversation with Martin Shkreli.