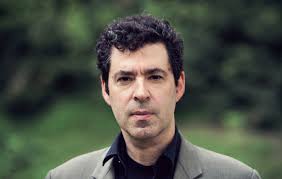 Hello and welcome to The Rob Burgess Show. I am, of course, your host, Rob Burgess.
On this our 122nd episode our guest is Jason Stanley.
Jason Stanley is the Jacob Urowsky Professor of Philosophy at Yale University. Before coming to Yale in 2013, he was Distinguished Professor in the Department of Philosophy at Rutgers University. Stanley is the author of "Know How;" "Languages in Context;" and "Knowledge and Practical Interests," which won the 2007 American Philosophical Association book prize; and How Propaganda Works, which won the 2016 PROSE Award for Philosophy from the Association of American Publishers. His first book, "Knowledge and Practical Interests," won the American Philosophical Association Book Prize, awarded to one philosopher every year, for 2005-6. He is a frequent contributor The New York Times, The Washington Post, The Boston Review, and The Chronicle of Higher Education, among other publications. Stanley lives in New Haven, Connecticut, with his family.
His new book, “How Fascism Works: The Politics of Us and Them,” was released on Sept. 4.
Join The Rob Burgess Show mailing list! Go to tinyletter.com/therobburgessshow and type in your email address. Then, respond to the automatic message.
I have a Patreon account, which can be found at www.patreon.com/robburgessshowpatreon. I hope you'll consider supporting in any amount.
Also please make sure to comment, follow, like, subscribe, share, rate and review everywhere the podcast is available, including iTunes, YouTube, SoundCloud, Stitcher, Google Play Music, Facebook, Twitter, Internet Archive, TuneIn and RSS.
The official website for the podcast is www.therobburgessshow.com.
You can find more about me by visiting my website, www.thisburgess.com.If you have something to say, record a voice memo on your smartphone and send it to therobburgessshow@gmail.com. Include “voice memo” in the subject line of the email.

Posted by The Rob Burgess Show at 2:55 PM